Director of Printing and Advertising at the Bauhaus 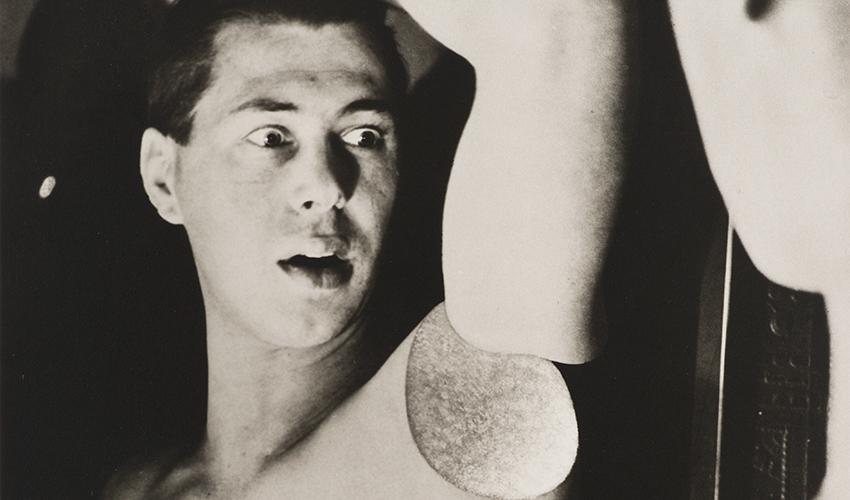 This article is preserving the text of the Wikipedia entry for Herbert Bayer as of 18 January 2020.

Herbert Bayer (April 5, 1900 – September 30, 1985) was an Austrian and American graphic designer, painter, photographer, sculptor, art director, environmental and interior designer, and architect. He was instrumental in the development of the Atlantic Richfield Company’s corporate art collection until his death in 1985.

Herbert Bayer’s 1925 experimental universal typeface combined upper and lowercase characters into a single character set. Bayer apprenticed under the artist Georg Schmidthammer in Linz. Leaving the workshop to study at the Darmstadt Artists’ Colony, he became interested in Walter Gropius’s Bauhaus manifesto. After Bayer had studied for four years at the Bauhaus under such teachers as Wassily Kandinsky, Paul Klee and László Moholy-Nagy, Gropius appointed Bayer director of printing and advertising. 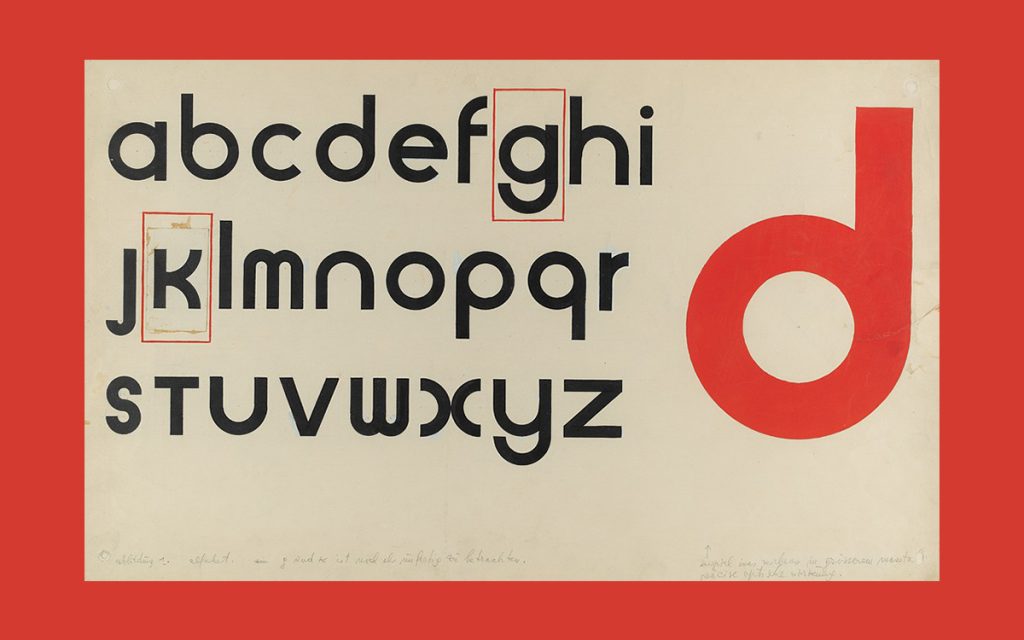 AIGA: Eye on Design — Examples of Bauhaus Graphic Design that Shaped the Movement: The Bauhaus archive launched by Harvard Art Museums is a treasure trove of type + print

In the spirit of reductive minimalism, Bayer developed a crisp visual style and adopted use of all-lowercase, sans serif typefaces for most Bauhaus publications. Bayer is one of several typographers of the period including Kurt Schwitters and Jan Tschichold who experimented with the creation of a simplified more phonetic-based alphabet. From 1925 to 1930 Bayer designed a geometric sans-serif Proposal for a Universal Typeface that existed only as a design and was never actually cast into real type. These designs are now issued in digital form as Bayer Universal. The design also inspired ITC Bauhaus and Architype Bayer, which bears comparison with the stylistically related typeface Architype Schwitters.

In 1928, Bayer left the Bauhaus to become art director of Vogue magazine’s Berlin office. He remained in Germany far later than most other progressives. In 1936 he designed a brochure for the Deutschland Ausstellung, an exhibition for tourists in Berlin during the 1936 Olympic Games - the brochure celebrated life in the Third Reich, and the authority of Hitler. However, in 1937, works of Bayer’s were included in the Nazi propaganda exhibition “Degenerate Art”, upon which he left Germany. Upon fleeing Germany, he traveled in Italy.

Time in the United States

In 1944 Bayer married Joella Syrara Haweis, the daughter of poet and Dada artist Mina Loy. The same year, he became a U.S. citizen.

In 1946 the Bayers relocated. Hired by industrialist and visionary Walter Paepcke, Bayer moved to Aspen, Colorado as Paepcke promoted skiing as a popular sport. Bayer's architectural work in the town included co-designing the Aspen Institute and restoring the Wheeler Opera House, but his production of promotional posters identified skiing with wit, excitement, and glamour.

In 1959, he designed his "fonetik alfabet", a phonetic alphabet, for English. It was sans-serif and without capital letters. He had special symbols for the endings -ed, -ory, -ing, and -ion, as well as the digraphs "ch", "sh", and "ng". An underline indicated the doubling of a consonant in traditional orthography.

While living in Aspen, Bayer had a chance meeting with the eccentric oilman, outdoorsman and visionary ecologist, Robert O. Anderson. When Anderson saw the ultra-modern, Bauhaus-inspired home that Bayer had designed & built in Aspen, he walked up to the front door and introduced himself. It was the beginning of a lifelong friendship between the two men and instigated Anderson's insatiable passion for enthusiastically collecting contemporary art.

With Anderson's eventual formation of the Atlantic Richfield Company, and as his personal art collection quickly overflowed out of his New Mexico ranch and other homes, ARCO soon held the unique distinction of possessing the world's largest corporate art collection, under the critical eye and sharp direction of Bayer as ARCO's Art and Design Consultant.

Overseeing acquisitions for ARCO Plaza, the newly built (1972) twin 51-story office towers in Los Angeles that served as the new company's corporate headquarters, Bayer was also responsible for the ARCO logo and designing all corporate branding related to the company. Prior to the completion of ARCO Plaza, Anderson commissioned Bayer to design a monumental sculpture-fountain to be installed between the dark green granite towers. Originally titled "Stairway to Nowhere" Anderson laughed, but felt the Shareholders wouldn't see the irony; thus he suggested it be named Double Ascension and it still stands between the twin skyscrapers today.

Under Bayer's direction, ARCO's art collection grew to nearly 30,000 works nationwide, managed by Atlantic Richfield Company Art Collection staff. ARCO's collection was eclectic, and consisted of an extremely wide range of media & styles; ranging from contemporary and earlier paintings, sculpture, works on paper (including drawings, watercolors and signed original lithographs, etchings and serigraphs) and signed photographs to tribal and ethnic art from many cultures, as well as historic prints and artifacts, all displayed throughout ARCO's buildings in Los Angeles and several other cities. Three years after ARCO was taken over by BP in 2000, that company's then-chairman, Lord Brown, personally ordered ARCO's art collection liquidated. It was sold through Christie's and LA Modern Auctions.

Bayer made provisions to donate, after his death, a collection of his works which had been housed in ARCO's conference center in Santa Barbara to the Los Angeles County Museum of Art. The works have been loaned previously to the Denver Art Museum. He was elected a Fellow of the American Academy of Arts and Sciences in 1979.

In 2019, the philanthropists and entrepreneurs Lynda and Stewart Resnick donated $10 million to the nonprofit Aspen Institute for a center dedicated to Bayer that will be located on the Institute’s Aspen Meadows campus, which Bayer designed. The facility, the Resnick Center for Herbert Bayer Studies, is to have galleries, educational programs, and an overall aim to provide tools for the preservation and study of Bayer’s work.